How safe is the air in your home?

Your home is where you and your family live, spending nearly 90% of our adult lives indoors*!

Nearly every family has someone who suffers from issues aggravated by poor indoor air quality*. According to the EPA and the American Lung Association, indoor air can be up to ten times more polluted than outdoor air*. That’s because every home generates and traps millions of potentially harmful airborne particles, pathogens and gases that are constantly breathed and absorbed by everyone in the home. SecureAire’s ACTIVE Particle Control is the only technology that transports hazardous indoor air pollutants to be captured and INACTIVATED™ within the filter.

Most airborne particles and gases in your home are invisible to the eye and are weightless, thus remaining suspended in the air. Even as air moves through your heating and cooling system, these potentially harmful particles including mold spores, bacteria, viruses, pollen, smoke and even airborne dust are NOT transported to the filters in your system. Standard filters are not active and cannot kill pathogens thereby allowing the continued breeding and potential release of these potentially harmful organisms into your home.

Why a Whole-Home Air Cleaner?

While portable air cleaners can provide a certain level of effectiveness in individual rooms, SecureAire’s Whole Home System is professionally installed into your central heating and cooling system. This creates the ability to Transport hazardous indoor air pollutants from every room in your home to the SecureAire Filter. 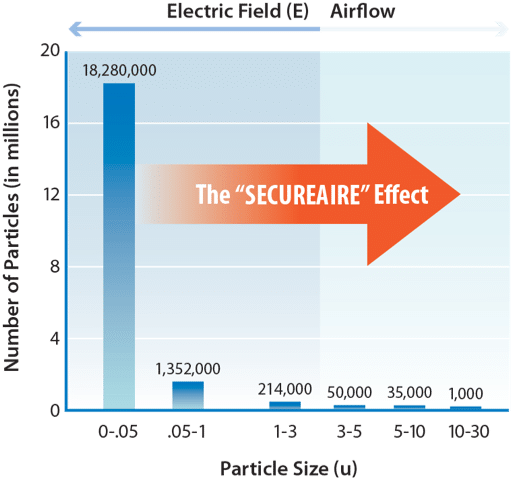 SecureAire’s ACTIVE Particle Control Technology has been proven in hospitals and LEED certified commercial buildings to exceed passive ltration strategies. It’s reliable and easy to maintain. Just replace the disposable filter when notified, typically every 12 months. Your family deserves Healthy, Clean, and Safe indoor air without a lot of work.

Save Energy, Save Money, Have Peace of Mind

Along with cleaning the air, SecureAire’s Whole Home Systems can save you money by keeping your heating and cooling equipment clean, maintaining maximum efficiency and thereby extending service life. SecureAire is backed by a 5-year product warranty and a 30 day Satisfaction Guarantee.

How does SecureAire actually kill pathogens like bacteria and virus?

Once the pathogens are captured by the air purification cartridge, the energy field that surrounds the cartridge will create oxidative stress at the pathogen’s cellular level and destroy them. All of them.

How does SecureAire actually get rid of airborne chemical compounds (VOCs)?

Once they are destroyed or broken down, what happens to the pathogens and chemical compound elements?

The pathogen “parts” and the chemical compound “elements” are held in the air purification cartridge by very strong ionic bonds and will not be released back into the airstream.

How can this air purification system be so efficient and effective and not be highly restrictive to airflow?

Each air purification cartridge includes trillions…literally…of tiny fibers. Each fiber is a 360-degree “collector” that will attract and hold particles, like a magnet, and absorb chemical compounds, like a sponge. As each fiber becomes coated with contaminants, another layer will then build up on the first, continuing to remove and destroy captured contaminants. Layer after layer of contaminants can be collected around every fiber without significantly restricting airflow.

When do I have to replace my air purification cartridge?

Unlike typical filters that are replaced when they “look dirty”, typically from 1-3 months depending on the filter type, the SecureAire Air Purification Cartridge can hold from 6 to 12 months of contaminants before it needs to be replaced. The HVAC technician can take a measurement to determine what that replacement interval should be.